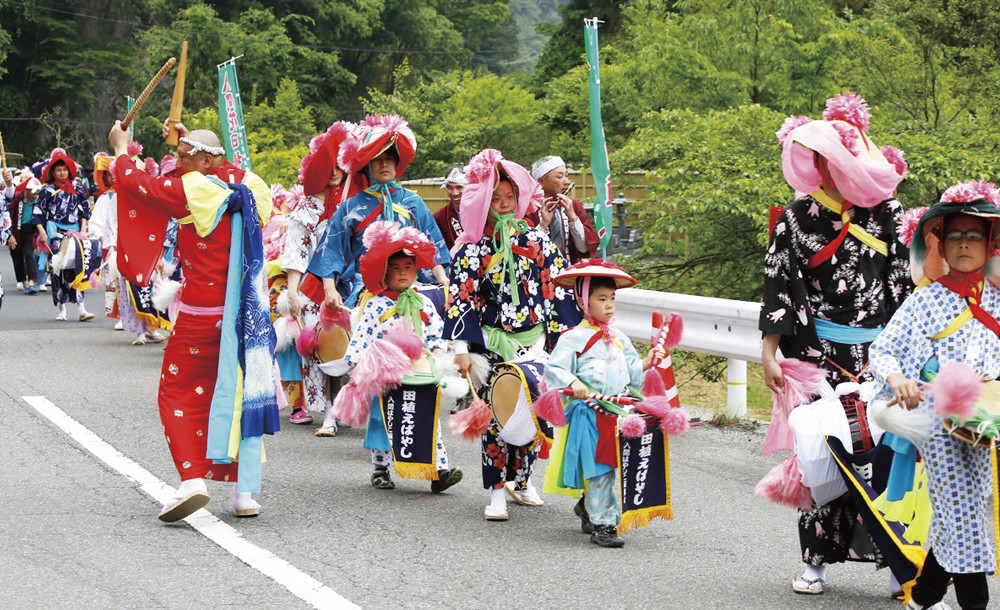 People sing as they march from the Irima Exchange Center to the rice planting fields.

Harmony is born across the generations, through the folk culture
of the hanataue rice planting rite

In the Chugoku, Shikoku, and Kitakyushu regions of Japan, hanataue is a Shinto rice planting rite set to the sound of drums, flutes, and other instruments. The tradition was lost for some time in the Irima district of the city of Unnan, but was revived in 2002 through the wishes of local residents. Every year, the small mountain village is crowded with participants and spectators from inside and outside the prefecture.

Children who beat drums as musical accompaniment. A light meal before the event. 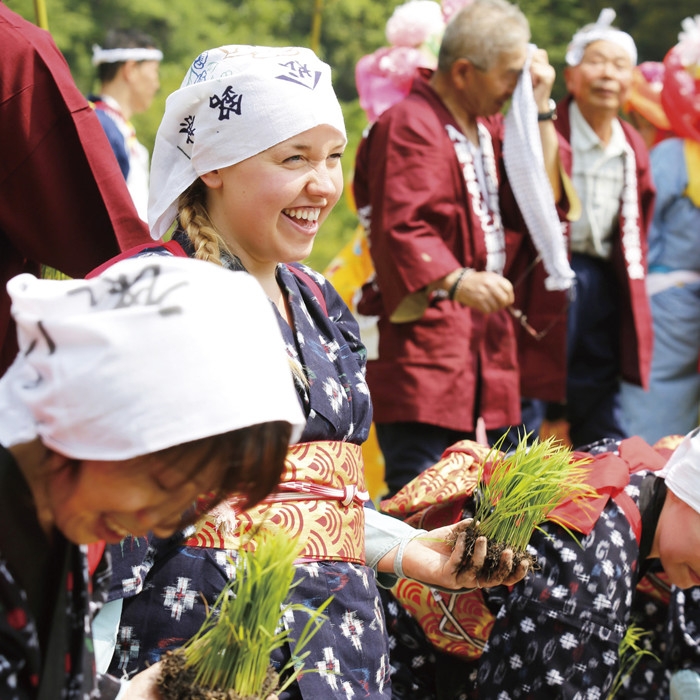 The city of Unnan is home to many myths, including the Yamata no Orochi dragon legend which appears in the ancient Kojiki chronicle. Once a post town, the Irima district is located in a valley between mountains. It is a peaceful area of rice fields, where the Mitoya River flows as a tributary of the Hii River. Every year in May, a festival is held in Irima to pray for good harvest of the five grains and for relief from illness. Here, the hanataue rite is held to lighten the hard work of planting rice. On a sunny day in May this year, the hanataue was performed in grand style.

The rite begins, watched over by the gods.

The child accompanists wear fancy costumes that brighten the festival.

The participants gathered at the Irima Exchange Center early in the morning. They include a variety of regulars and first-time participants, including local parents and children, international communication staff, and university students from Tokyo. All changed into the proper garb for their respective roles. Saotome are women who put on a showy display of rice-planting. They wear traditional kasuri fabric and put on sashes for the planting. The children and adults acting as musical accompanists wrap showy obi belts over yukata robes, and place flowers on their sunshades. Changing into a costume for the special day, my mood lifts.
First is a light meal. We have salted rice balls and a simmered dish called nishime, made by local mothers. Purifying sake is indispensable for a festival! Already feeling a wee tipsy, the dads get energized by lifting a few cups together. 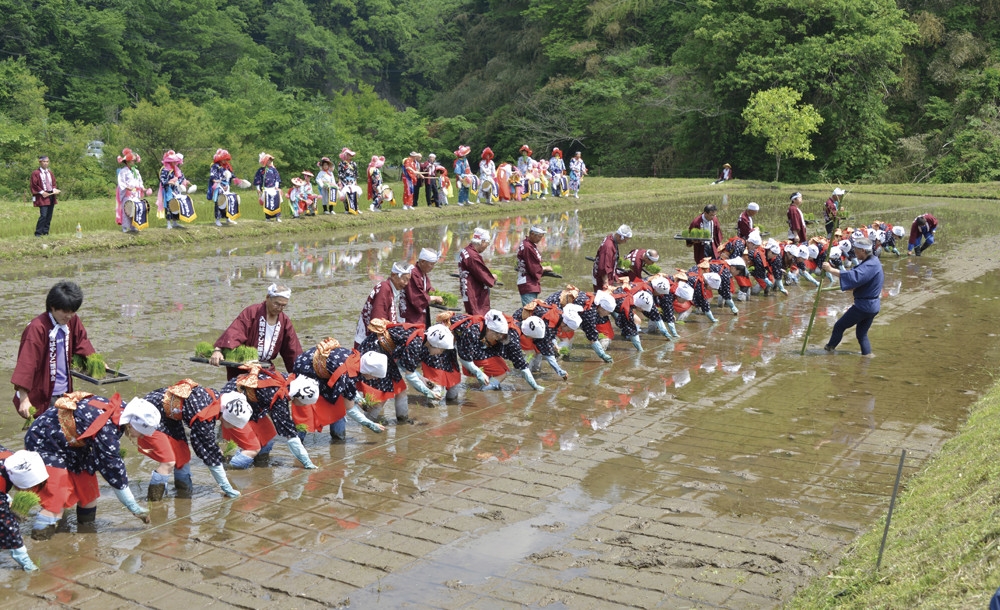 The rice planting is a cooperative effort between the saotome maidens and the supporters. They plant seedlings at a good pace, to the song of the hanataue rite.

The signal to depart is heard. A Shinto priest leads the procession along the road from the Exchange Center to the paddy fields where the hanataue will be performed. Arriving at the paddy field, the participants offer Shinto ritual prayers at the altar of Yaeyama Shrine, and begin the hanataue rite.
The saotome maidens line up side by side and plant seedlings at a strong pace, moving to the drums and flutes of the musicians They seem to gradually become accustomed to the initially uncertain moves. However, leaning forward to plant the seedlings and walking through the field's mud is heavier labor than it appears. The planting went on bit by bit, with time taken for breaks. When all of the seedlings had been planted, great applause from the spectators echoed in the valley.

Saotome maidens, catching their feet in the field's mud as they color the festival.

Local women from outside Unnan also participated for the first time.

"It was fun to have this unusual experience!" and "I want to come again next year," said university students in saotome garb, washing their muddy hands and feet in a stream.
It was a day of encountering the rustic folk culture of the countryside, amid the primal landscape of Japan. The locals who inherited the tradition and the young participants, smiling as they talked with each other, seemed like parents and children. The feast lasted until the night, with wishes that the seedlings planted today would bear fruit in the fall. 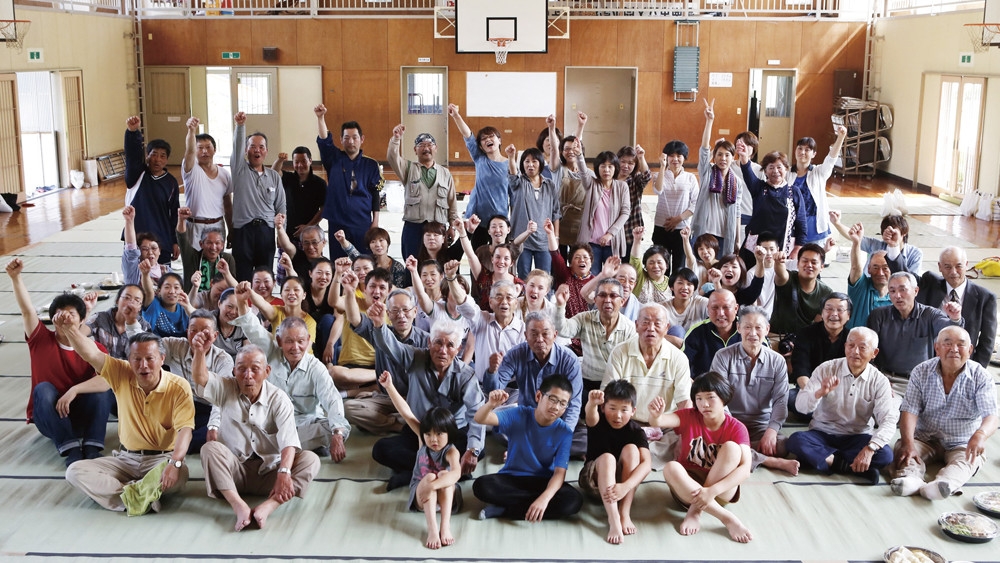 After the end of the hanataue, local people and participants gathered in the gymnasium for a closing event.